To me Steve's crazy accusation feels like a red-herring---------he is trying to deflect blame from himself and his wife.  But hey, it wasn't me who gave a Downeast Energy-owned device to somebody else to use as her personal computer!

Liz McCusker DID parse at least 7 months of emails that were sent to Steve at Steve's Downeast Energy email address, and she did so by using his company-owned iPad.  Steve has admitted this on several occasions.  Whether or not she gleaned proprietary information from Downeast's customers is a question I cannot answer.  But what I do know is that no customer writes an email to a business and thinks that the information in their email can and will be viewed by individuals who are outside of that company....such as a mid-level employee's wife.  I don't know about you, but generally when I email a utility, I presume my email won't be viewed by family/spouses of employees-------particularly those who have previously been confined to a mental institution.

It is absolutely disgusting to me that Downeast Energy allows their devices to be used by "family" (according to Steve McCusker; please see his letter below); yet does not allow employees to receive any other emails or phone calls on those same devices (such as from me, who wanted to give Stephen McCusker a heads-up regarding my Court-Order against him). Funny how he uses his devices to phone others, such as Matt Gilligan.

Liz McCusker has spent a lot of time and energy over the last few years trying to find out information about me. This is a matter of record; she admitted to this under oath.  As a customer of Downeast, my physical address and some financial information resided within Downeast Energy's computers.

So which of us has the ability to snoop?  Which of has the motivation?  Is it me, who has nothing to look for and no means to do so; or is it Liz McCusker who not only has the means via her husband's passcode, and has already been caught looking at her husband's corporate emails?

It's "Jack Hill" all over again

So once again Steve is falsely accusing me of a felony.  You would think he would have learned a lesson after, whilst posing as "Jack Hill", he made so many false accusations for which he is now paying the price----literally, in monthly installments.

I have to admit, this new accusation is so off-the-wall that to me it really smacks of Liz's influence.  I've known Steve for 43 years and he's generally a pretty reasonable guy.  It does trouble me that he has lied to me a great deal, and then made excuses for doing so.  As has been noted many times on this web site, his lying about the purpose of the loan he'd asked for from me was the underlying [no pun intended] factor as to why I prevailed in federal Bankruptcy Court......i.e. he admitted to fraud under U.S.C. 523.

The times when he's really gone off the rails intellectually have been when he's feeling pressed on by Liz.  I very much dislike how Steve just caves in to Liz's demands---after all, he often talks about the fact that she is mentally ill, so kow-towing to a person who has trouble processing societal/social interactions doesn't make sense to me.

I do understand it on some level, and even feel sorry for him.  But we're all adults here, and using "I had to lie to you because otherwise Liz would make my life a misery" doesn't really cut it with me anymore.

If he or his employer truly believe that I could have....or would even want to....breach Downeast Energy's internet accounts, I welcome the lawsuit.  I am so totally disgusted that once again Liz McCusker has Steve convinced that her own bad actions were somehow the fault of someone else.

Steve admitted in June that Liz had broken into his Downeast Energy email account.  And now it is I who is being accused of doing so?

I should also note that Steve misquotes me in the letter below.  I have never said, that I could "[see] everything Liz does on her computer".

What I DID say, and I stand by, was that I could see everything Liz does on ​Facebook.

I breached no Downeast Energy internet accounts-----Liz McCusker did, and frankly I think she should be sued for that.

Recall that Steve McCusker admitted, via email, that Liz McCusker had read his corporate emails.  Downeast Energy is at risk here, not me, as I consider my options.  I am very unhappy that Liz broke into Steve's corporate emails and used his iPad.

Of course the McCuskers could reach out here and settle the matter.  But it's my opinion that they really don't get it.

They need to be held accountable for their actions.

As does Downeast Energy.  I challenge Downeast Energy's attorneys to  look up "Jack Hill" on Facebook.  Liz tried to delete it, but it still survives, unfortunately. 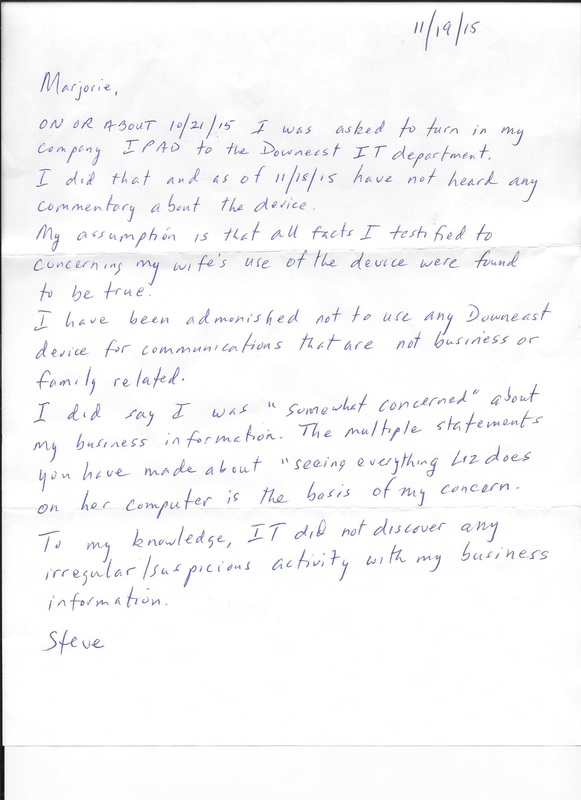