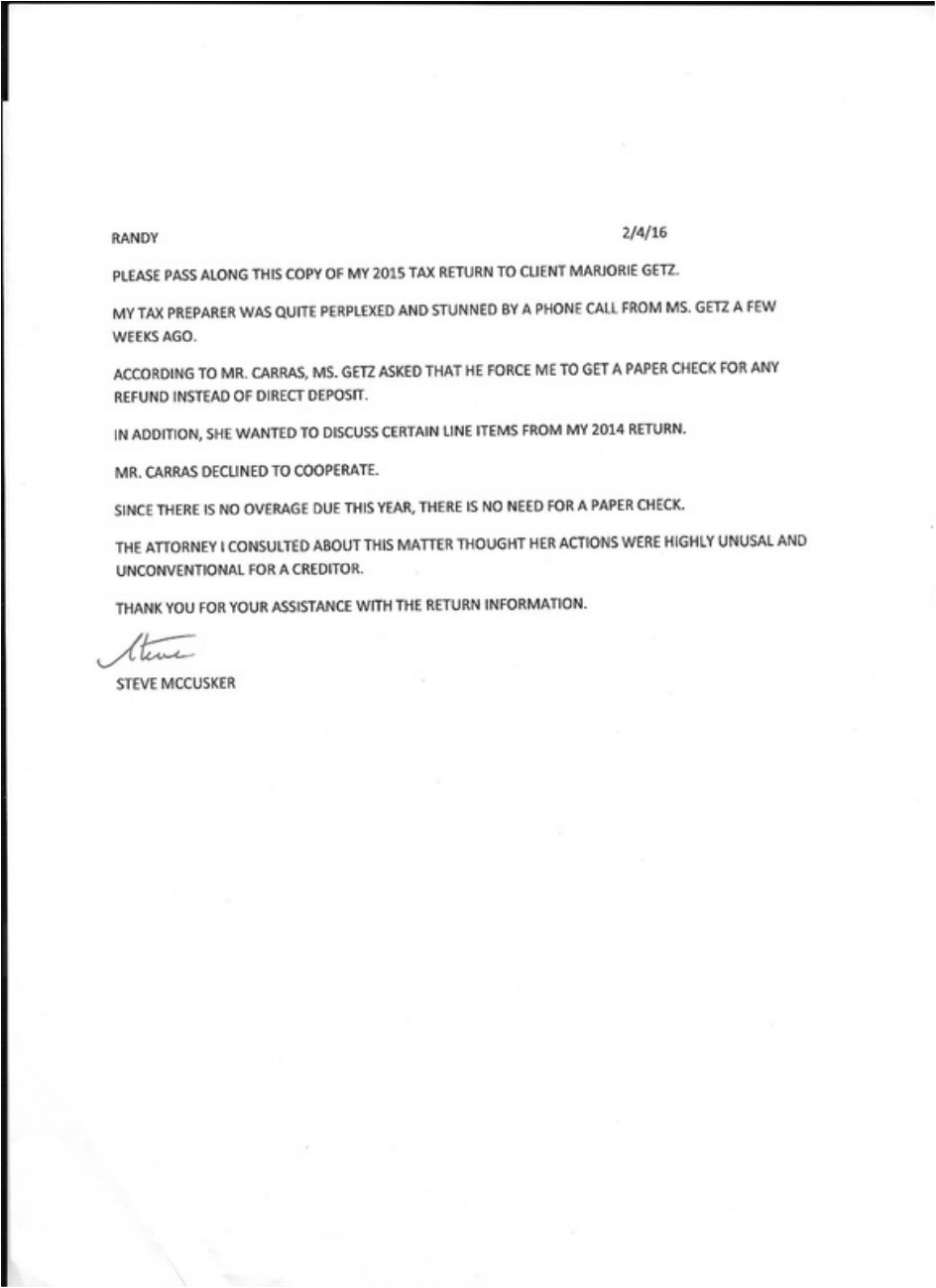 There are so many misstatements in the above letter, one wonders if Steve McCusker is back to attempting to defame me again. He seems to forget that I have myriad reasons to distrust that he will perform his obligations.

Steve McCusker is under a Court-ordered obligation to provide me with his Federal Tax Return each year, and to pay me certain amounts based upon that Return.  [This is Public Record in Cumberland County Superior Court, and anyone may access the terms of our agreement].

​HE asked if I would agree to his getting a paper-cheque from the I.R.S, NOT a direct deposit.  HE felt that this would be a better way of dealing with the payment, so that we could do so without his wife's involvement.

So if he's complaining about deals he himself made (not for the first time)......I've got about a hundred reasons to not believe he will follow-through with things he says he'll do.  I could start this discussion about how he signed Promissory Note, and then denied he signed it....then admitted to the fraud (Section  523) in his settlement in Bankruptcy Court.  And let's not forget that I had THREE Judgments against him before he actually started performing under those Judgments.

So, yup, he's absolutely right that I phoned his tax preparer to tell the preparer about the Judgment that required a paper cheque.

My phone conversation with the preparer IS RECORDED.   Steve McCusker's statements about that conversation are false and defamatory.

So let's go through the accusations:

If Mr. Carras was "perplexed and stunned", he certainly didn't indicate it-----his conversation on the recording is professional yet very friendly.

The recording lasts just under 2 1/2 minutes.  The first 1 minute and 5 seconds of it are me explaining who I am, explaining the Court Order, and telling him I was calling as  "reminder" to Steve.  It's extremely clear that I am not trying to "force" anybody to do anything------I am heard saying that I am calling simply to give Mr. Carras information, because I was worried that Steve might forget.

I  AM CLEARLY HEARD SAYING THAT I DON'T EVEN KNOW IF STEVE AND LIZ WILL BE USING MR. CARRAS TO PREPARE THEIR RETURN.  There is laughter, and Mr. Carras is clearly comfortable with the conversation.

The recording is clear------I am not attempting to "force" Mr. Carras into anything.  I in fact say, several times, "This is just a heads-up about a Court Order, that because Steve and I made the agreement 6 months ago, he may forget".

I TELL MR. CARRAS THAT I REALIZE I AM NOT HIS CLIENT.  HE SAYS THAT AT THAT POINT, "I DON'T EVEN KNOW IF STEVE IS MY CLIENT".

THE CONVERSATION ENDS ON A BRIGHT AND FUNNY NOTE-----MR. CARRAS AND I JOKE WITH ONE ANOTHER.

And I actually don't know what Steve McCusker means by the idea that I wanted to "discuss certain line items" from his 2014 Return.....ALTHOUGH THAT WOULD BE MY RIGHT TO DO  under the Court Order to which Steve agreed.   I AM heard (in the 2 1/2 minute conversation!!!!!) saying that I don't understand why Steve and Liz would pay H & R Block $250 to prepare a 2-page return that takes about 15 minutes to prepare.

For the record, Steve once told me that Mr. Carras saved him some money one year, and thus Steve feels that he is obligated to have Mr. Carras prepare his returns ever-after.  Or maybe Steve's just too lazy to take 15 minutes to prepare his simple return himself.